The Kitchen is the Heart of our Home.

“It’s where our kids — and a lot of their friends— grew up. We love to cook and entertain, and when our now-grown children come home, they cook, too. So we asked Vive to take on our kitchen remodel project and we worked with designer Jill Dybdahl to make it look exactly how we wanted.”

Our client’s story told in their own words:

Our home was a “Spec” home, one a builder builds without having a buyer, with the hope that someone will buy it as soon as it’s done, or even before. It’s move-in ready. Which is why we’re here.

But this means we didn’t design this home. And the builder, not having a list of wants from a buyer, did things his way, sometimes cutting corners.

When we were thinking about remodeling, some of our friends asked us why we weren’t just moving to a new house. Well, our family grew up here. We moved in 20 years ago and became very good friends with all the neighbors. Six families had kids around the same ages and together, we raised all our kids. You know that saying, “It takes a village to raise a child”? In our case, our neighborhood raised 15.

That’s a big reason why we don’t want to move. This neighborhood is very much like our extended family. We’re still very close to some of our neighbors, we also have a glorious retreat in our backyard, and lastly, we didn’t want the expense and hassle of buying and moving to another house. We thought, why move when we can turn the space we have into what we want? 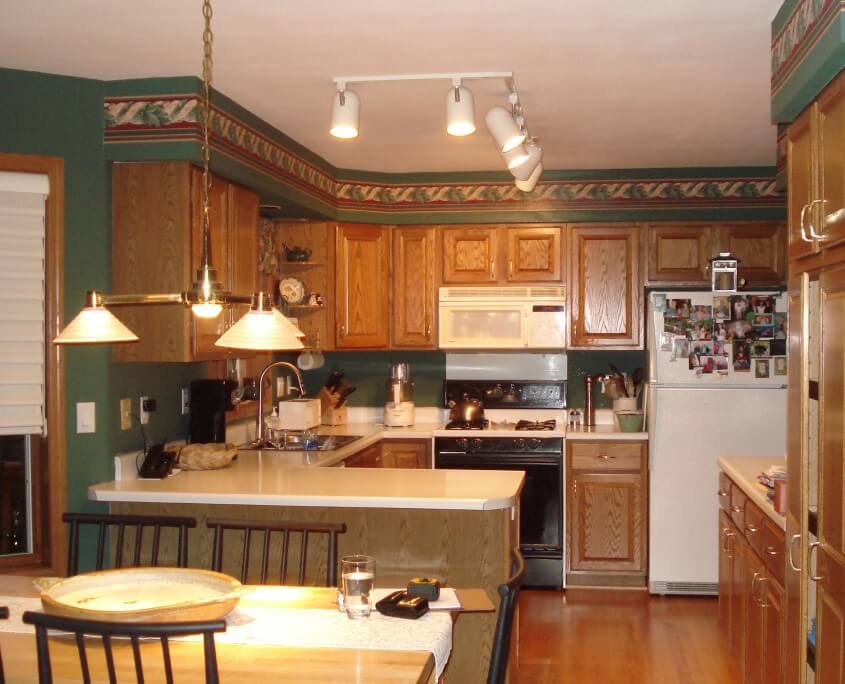 A before shot of the dark, cramped kitchen. 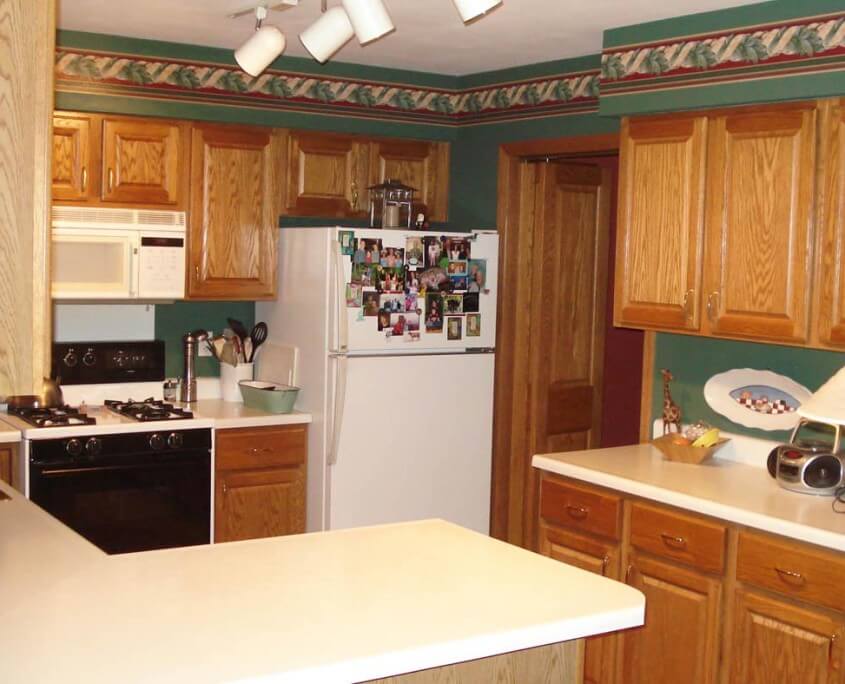 Our previous kitchen didn’t have much in the way of room for multiple to cook or visit.

So because we didn’t want to move, we knew we needed a change.

We thought we’d redo the kitchen and adjoining areas. The old kitchen was functional, but it was ugly. It wasn’t beautiful when we bought the house, and 20 years and three kids later, it isn’t any prettier. Also, it was tiny and the flow was terrible; it never worked.

Lastly, the dining room was isolated from the rest of the house. It felt like a journey to get there, and we wanted it to be more a part of the living area.

We were looking for options at remodeled home open-houses where we met Jeff, the owner of Vive. He was showing a stunning kitchen they built. The quality of the workmanship and the cool modern kitchen design started a lot of wheels turning.

The list of problems we needed help with was extensive. With a project this large, we knew Vive would listen to our thoughts and provide great options.

First and foremost, the kitchen had to be bigger. We needed to be able to have two or more of us working in it without killing each other. We wanted to improve the function and flow, make it modern without losing the character and make it welcoming.

They put a banquette in the corner of the kitchen (with storage under the benches!), which took up much less space than a table and chairs. This improved traffic flow greatly, including from the deck to any other room in the house, and also allowed more counter space for sitting and/or food prep.

They added a separate cook top so several people can cook at the same time, without banging in to each other.

To support the added cooking area, two separate work zones were created, each with its own sink and disposal.

The main countertop was circular in shape, to limit protrusion and obstruction, but maximize serving and seating area.

Lastly, in a stunning bit of creativity, Vive took the angled corners of the bay in the dinette area and cantilevered them over the existing deck to square off the room. The sliding door was replaced with a single panel glass passage door and a smaller window placed above the banquette. This added a lot of space.

The old kitchen was also pretty dark. We wanted improved lighting, for work and atmosphere.

Vive took out the old track lighting and replaced it with cans for general lighting (with dimmers, so we could change the mood), and under-cabinet lighting for task lighting and to accentuate the cherry cabinetry, granite countertops and custom backsplash. 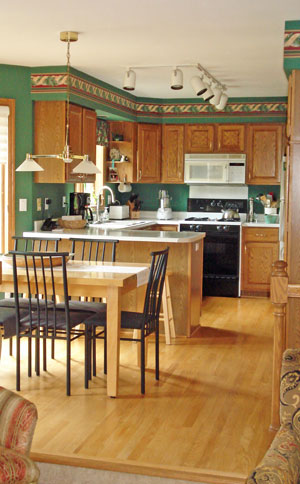 The cramped layout of the kitchen before remodeling. 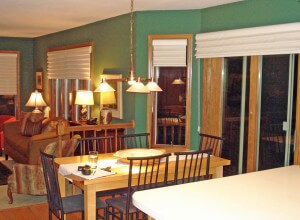 The dark walls and small dining area needed an update. 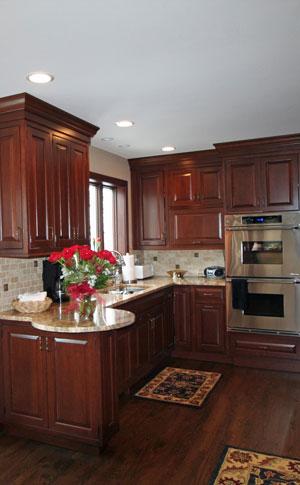 Our new kitchen has modified counter space that opens the room up to the dining area. 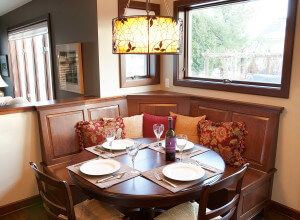 Our new dining area, complete with a banquette that also serves as storage space.

We have quality furnishings, so we wanted the new spaces to reflect that quality, especially since the new layout opened them up to each other.

High-end cherry cabinetry was specified, with a beaded inset in a custom finish, to complement the family room. A matching cherry mantel hood with large carved corbels and paneled appliance covers blends and creates continuity in the space.

In addition, all appliances installed were professional-grade, with high energy-efficiency ratings.

Vive went above and beyond in this area. After all, their craftsmanship and attention to detail were the main reasons we chose them.

The cabinetry is all dark cherry, which complements the rest of the house perfectly.

They resanded and restained our existing hardwood floors to restore the natural beauty and connect all the rooms with an open feeling throughout.

The matching cherry bench pieces were supplied by the cabinet maker and Vive assembled them onsite.

Vive created and inserted headers, added a stair rail and framed the new opening in the passageway between the living room and dining room, making it appear original to the home.

Vive had extra cherry trim milled to tie the whole house together aesthetically with the rooms and the furniture.

As a final touch, Vive used leftover cabinet legs as pillars and custom trim to create a more finished and substantial look for the corbels at the cook top, providing a much more complete, finished appearance.

We are astonished with the transformation! Everyone loves our new kitchen area, even the neighbors! The family gathers here just like before, but it’s so much easier to be here, and it’s relaxing and welcoming, with the living room and dining room as part of it. Lots of people can cook and prep and eat and talk with people in the living room and dining room, all at the same time! It turned out so much better than we could have imagined. We knew we’d be happier, but we had no idea just HOW happy it would make us.
The kids use any excuse to visit, neighbors stop by, and everyone just hangs out here. It’s a dream come true!

This project was a 2011 Honorable Mention Residential Interior award winner.